Chris Case, Chief Technology Officer at Oxford PV, strongly believes that solar power must represent 50% of the global energy mix by 2050 if we are to have any chance of saving this planet. “There’s no real logical reason to expand energy infrastructure other than solar,” Case says. “There is no better source of energy.”

A look at the energy sector shows that it is not alone in this belief. Solar is the fastest growing energy source in the EU – in the summer of 2021, solar panels generated a record 10% of EU electricity. However, this is far from 50%.

The biggest hurdle to greater solar market share is improving panel efficiency (the proportion of incident solar energy that can be converted into electricity). The fundamental efficiency ceiling for single-junction cells—the Shockley–Queisser limit—is about 30% for silicon-based cells. While some researchers and entrepreneurs have looked for ways around the problem, others have looked to multiple junctions.

This is the approach that Oxford PV, a spin-out from the University of Oxford, UK, has taken. Its tandem cells have a coating of a perovskite material on top of the silicon. Perovskites can be tuned to absorb more short-wavelength blue-green light, leaving silicon to absorb longer, redder light. 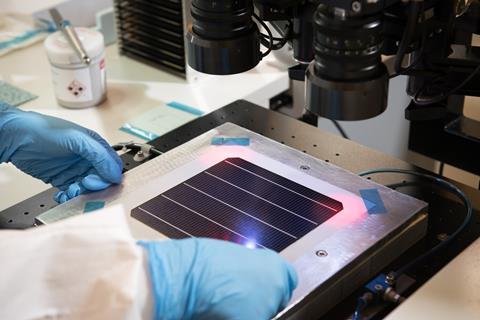 The company was able to set new records for solar cell efficiency. In 2020, Oxford PV showed that its cells could convert 29.52% of solar energy into electricity. Commercial silicon panels fluctuate between 15 and 20%, with a maximum conversion rate of around 26%.

At these levels of efficiency, perovskite-based tandem cells open the door to a rapid transition to solar, Case believes. “As we increase efficiency, the cost of energy is reduced, allowing us to move to something faster, which further reduces costs,” he says. “And the faster we accelerate the adoption of solar energy, the better our chances of stopping climate change.”

Oxford PV was created out of the University of Oxford in 2010 by physicist Henry Snaith and Kevin Arthur, a serial entrepreneur in high-tech companies. Case was hired in 2014 to market the product – initially aimed at building-integrated photovoltaic applications, before the focus shifted to tandem solar cells. 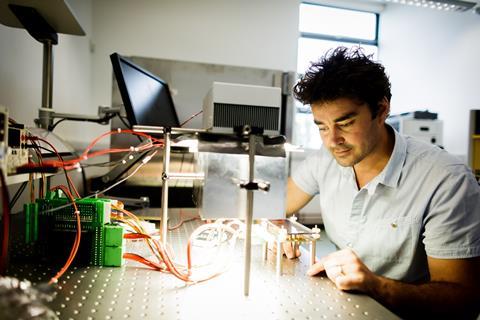 Commercial production of the cells was to begin in 2021 at the Oxford PV industrial site in Germany, Europe’s largest solar market. After a delay due to Covid-19 and related supply chain issues, it is now ready to start later this year. It will be the world’s first volume manufacturing line of perovskite-on-silicon tandem solar cells.

While silicon solar panels with efficiencies greater than 20% are already available to homeowners at competitive prices and improvements are continually being made to silicon cell technology, Case insists that it will be necessary to go beyond silicon if solar energy is to realize its potential.

Silicon is an indirect bandgap semiconductor, so some energy will always be lost when transferring between photons and electrons. Silicon must also be meticulously purified, and extracting it and transforming it into high-quality solar cells is a resource-intensive process. “It takes seven tons of silicon to make a million watts of solar cells, but only 35 kg of perovskite for the same result,” says Case.

Oxford PV argues that the small environmental footprint involved in producing perovskite cells somewhat offsets the unresolved material issues. The most important of them is that they contain lead. Alternatives, such as tin, have been tried and tested but cell performance degrades rapidly. 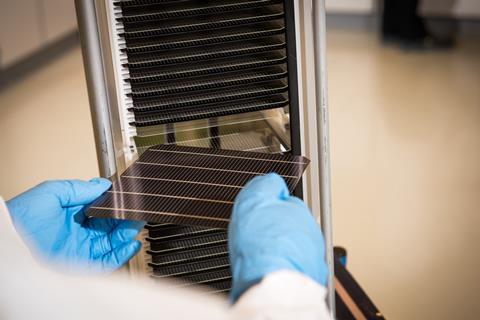 A life cycle analysis of the Oxford PV tandem cells suggests that the small amount of lead they contain would not have much of an impact on environmental toxicity if it leaked out. There are strict occupational exposure limits for the levels of lead that workers can be exposed to, but EU legislation allows the use of lead in solar cells. “That’s not to say it’s undesirable to reduce or eliminate it in the long term,” Case says, and Oxford PV is trying to phase out the lead used to connect solar panel wires and connectors. .

Overall, Oxford PV says cell production with its perovskite materials is sustainable. The company released an analysis last year showing that there are enough raw materials available to make perovskite solar cells that would produce more than 30 terawatts of power at peak efficiency. This is enough for all the solar capacity expected to be built by 2050.

The company plans to expand its current 100 megawatt/year capacity plant to two gigawatts/year by 2024 and build additional plants every two years thereafter. By the end of the decade, Oxford PV should have at least ten gigawatts/year of high-efficiency solar cells in production, according to Case. “The demand for a high efficiency solar product is huge and there is no commercially viable alternative to this product. You can craft as much silicon as you want, but you cannot craft [solar cells] more effective without a multijunction approach.

Origin: Spin-out from the University of Oxford