As talks are underway to end the conflict in Ukraine, it is worth reviewing the latest national accounts data in more detail. Thanks to the foreseeable increase in mining activity (stimulated by high commodity prices) and the resurgence of the trade and hospitality sectors, nominal GDP increased by 12% to a level close to 6, 2 trillion rand.

Deflated by the average Consumer Price Index (CPI) for 2021, this translates to a real growth rate of 7.4%. Unfortunately, Stats SA uses a rather complicated set of formulas to remove the effect of inflation from the nominal data, resulting in a lower real growth rate of 4.9%.

There is also a huge question mark on the calculation of the value added by the agricultural sector. According to data from producer organizations representing the main contributors to agricultural production, 2021 was a record year for most product groups, but data from Stats SA shows a fall in the sector’s value added of 11% (in nominal terms).

The agricultural sector’s record export performance in 2021 further confirms a likely serious error in Stats SA’s estimate of the sector’s contribution to GDP in 2021.

Under the conservative assumption of a nominal 10% increase in agricultural value added in 2021, South Africa’s real GDP growth rate for the last year stands at an impressive 8% (deflated by CPI).

An encouraging feature of the GDP data for 2021 is the recovery in net capital formation, which recorded a very healthy nominal growth rate of nearly 14%, boosted by a predictable recovery in inventories. In 2020, when the pandemic took hold, stocks fell by a record R53.6 billion.

In 2021, this component of capital formation remained in negative territory, but at a figure of minus R9 billion, it represents a turnaround of over R44 billion.

A further recovery in 2022 is inevitable, which should provide a growth impetus to new investments in productive assets (including infrastructure). In 2021, both the private sector and state-owned enterprises managed to increase their spending on new economic capital in real terms.

The country’s real GDP and key sector growth rates in 2021 are listed in the table below (deflated by the CPI): 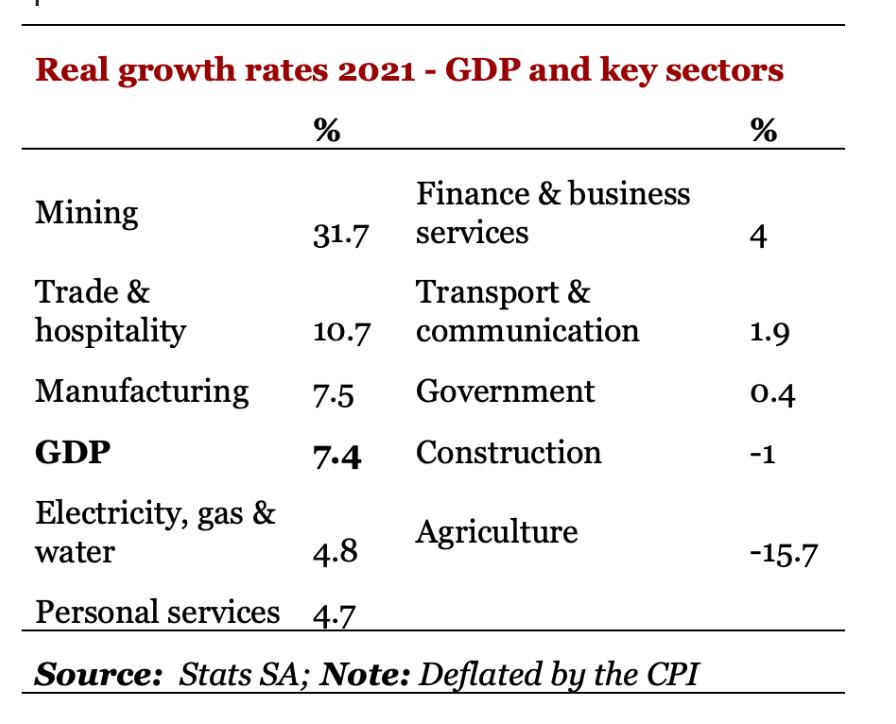 Attention is now turning to the prospects for another strong economic performance in 2022, with widely varying opinions among different forecasting agencies and institutions. According to the IMF, South Africa is expected to register real GDP growth of just under 2%. The National Treasury is more optimistic, coming in at 2.1%.

Given the high probability of a full recovery of the hotel industry, an impressive pipeline of infrastructure projects, new government initiatives to cooperate with the private sector in the area of ​​deregulation and the second phase impending stock recovery, these forecasts seem ultraconservative. 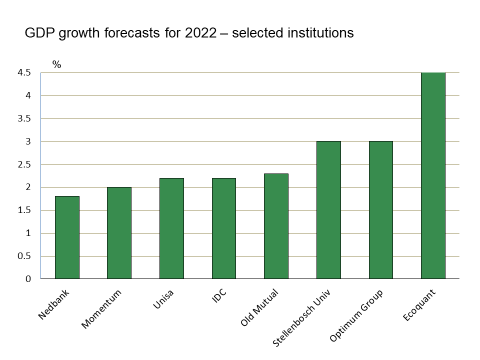 A number of reputable institutions are expecting significantly higher growth this year, as shown in the chart above. Let’s hope the National Treasury finally proves it was careful (just like last year!) BM/DM