Freshman Lyndsey Hooker escaped a goal-laden outing traffic jam late in the seventh without scoring as No. 1 Prosper held on to beat No. 10 Allen 6-5 in a clash class 6A softball teams in the region. Tuesday. It was Prosper’s second one-point win over Allen this season, following an 11-10 win on March 25.

Hooker got a home out on picking a defenseman for the second on the seventh, then with the bases still loaded she got a pitch to end the game. Prosper (26-3-1, 11-0), who clinched the 5-6A district title and is ranked No. 7 in the state, won his 14th straight game as Hooker hit a home run in solo and Texas Tech signee Elizabeth Moffitt was 2 for 4 with a run and an RBI.

Prosper built a 6-3 lead with two runs in the top of the sixth, an inning that included an RBI single by Houston signee Ayden Allen and a two-out RBI double by Moffitt. Allen scored twice in the bottom of the sixth on a Harper Garrett two-run single that made it 6-5, but it wasn’t enough as Allen (18-11-2, 7-4) watched Denton Guyer (17-5-2, 9-3) clinch second place in 5-6A beating Little Elm 13-3.

South Grand Prairie’s Cassidy Fixico threw a no-hitter in Tuesday’s 15-0 softball win over Arlington Lamar, but that’s not the only thing that made his performance so spectacular. The junior recorded all of the one-strikeouts in the four-inning rout.

Fixico didn’t get a perfect game because of a walk and three SGP errors, but she struck out 12 on just 59 pitches for the state’s 10th-ranked 6A team. She also tripled and had a pair of RBIs for SGP (25-2, 12-0), which finished undefeated in the 8-6A district.

Owen Proksch, Southlake Carroll: The Duke signee didn’t allow a hit in four scoreless innings while striking out eight as the area’s fourth-ranked 6A team beat Keller Timber Creek 12-0 in five innings. Proksch also homered and was 2-for-3 with three RBIs for Carroll (21-8, 7-2 District 4-6A), while Nick Jones homered and Max Reyes had three RBIs.

Keever Vincent and Nick Robb, Keller: Vincent struck out 11 runs while allowing two runs in five innings to earn the win, and Robb earned the stoppage by striking out five in two scoreless relief innings as the state’s seventh-ranked 6A team held firm to beat Trophy Club Byron Nelson 3-2. . District leader 4-6A Keller (18-5, 10-1) remained one game ahead of Southlake Carroll in the loss column.

Zach Dowdy, Denton: He threw one three hits and struck out five in a 5-1 win over Birdville, ranked No. 3 in the region in 5A.

TJ Pompey, Coppell: He threw a two-hit shutout and struck out nine as the region’s fifth-ranked 6A team beat Plano East 3-0.

Jackson Dillingham, Frisco Wakeland: He was 2-for-4 with two RBIs in a 5-4 win over Frisco Heritage that knocked Heritage out of a tie for first in the 9-5A district. Carson Priebe drove into the winning race in the bottom of the seventh with a pick-and-place runner who scored Addison Brown.

Cade McGarrh, Frisco Liberty: The Texas Tech signee threw 1 2/3 scoreless relief innings to earn the stoppage, struck out six (one hit on a dropped third strike) and was 1 for 2 with two runs and an RBI in a win of 9-6 against Frisco Reedy. . Jack Dehnisch was 2 for 2 with a run and two RBIs for Liberty, who took sole possession of the top spot in District 9-5A when Frisco Heritage lost to Frisco Wakeland.

Cole Lancaster, North Forney: He threw a two-hit shutout with seven strikeouts in a 5-0 win over Crandall. He has 39 strikeouts in 21 innings over his last three starts.

Jett Williams, Rockwall Heath: The Mississippi State signee doubled, tripled, stole a base, scored three runs and drove one as the state’s top-ranked 6A team beat Tyler Legacy 7-1 and extended its lead in District 10-6A to three games over Legacy and Rockwall with three district games remaining. Baylor Baumann threw a three-hitter and struck out six for Heath (23-3, 9-0) as the defending 6A state champion extended his winning streak to 14 games.

Mac Rose, Rockwall: He threw a one-hit shutout with seven strikeouts as the region’s eighth-ranked 6A team defeated Mesquite Horn 4-0. He allowed a single to the first batter late in the first, then struck out 21 of the last 22 batters he faced.

Blake Brigance and Logan Myers, Arlington Martin: They each homered and had five RBIs in a 20-0 win over Grand Prairie, and Brigance hit a grand slam.

Jensin Hall, Frisco Heritage: Dartmouth’s commit threw a one-shot shutout and struck out 13 as 9-5A District champion Frisco Heritage beat Frisco Wakeland 4-0. Heritage (23-1, 17-0), ranked No. 2 in the state in 5A, earned a three-run homer from Nadya Quezada late in the fifth as he extended his winning streak to 17 games.

Ainsley Pemberton, Rockwall: The sophomore followed last week’s no-hitter against state-ranked South Grand Prairie by throwing a one-hit shutout with 12 strikeouts in a 10-0 win in five innings against Mesquite Horn. 10-6A district champion Rockwall (24-4, 11-0), ranked No. 6 in the state, had two hits and four RBIs off Roxy Thompson.

Lucy Crowder, Hebron: She homered, was 3-for-5, scored two runs, had three RBIs and pitched a full game while striking out nine as Hebron beat Plano West 11-7 to grab the top spot. of District 6-6A.

Karine Morrison, Colleyville Heritage: She had three RBIs, including a two-run double in a fifth-inning three-run bottom that ended up being the difference maker, as the region’s fourth-ranked 5A team beat Birdville 6-4. Colleyville Heritage (23-3, 12-1) entered the District 6-5A on Tuesday with a game against Justin Northwest.

Jacey Lees, Richland: The sophomore threw a three-scoring shutout and struck out eight as the area’s sixth-ranked 5A team beat Lake Dallas 4-0. Landri McKittrick hit a three-run home run for Richland in the first inning. Lees allowed just two earned runs while striking out 55 runs in 35 innings during Richland’s five-game winning streak. Richland (19-7-1, 10-3) entered Tuesday one game behind second-placed Justin Northwest in the 6-5A district.

Nevaeh Richmond-Huzarevich, Arlington Martin: She threw a one-hitter shutout, struck out nine and went 2-for-3 with two doubles, two runs and two RBIs in a 14-0 rout of Arlington Sam Houston. Martin had 11 more hits — seven doubles and four triples — and was second in the district 8-6A.

Tamya Waiters, The Colony: She allowed one hit and struck out nine in six scoreless innings in an 11-0 rout of McKinney North that kept The Colony (16-8-1, 11-2) a game behind the district leader 10- 5A Prosper Rock Hill, with a game to play. Waiters allowed one run and five hits while striking out 36 in 25 innings over his last four games.

Madison Treadwell, McKinney Boyd: She worked about eight hits and four walks to allow just one unearned run while blocking 10 runners in Boyd’s 4-1 win over McKinney.

Runs scored in the second inning by Woodrow Wilson’s softball team in a 26-2 three-inning win over Carrollton Newman Smith. Woodrow Wilson had just six hits in the game and walked 17.

Home runs hit by the Mansfield Legacy softball team during their 12-game winning streak. Lucy Ballard and Ashlyn Rushing earned a 22-0 victory over Everman on Tuesday as Legacy (20-5, 13-1) finished tied with Burleson Centennial for first place in the district 8-5A.

Runs scored by Keller’s softball team in the top of the seventh as they rallied to beat Trophy Club Byron Nelson 10-5. Mya Gonzales hit a solo home run in the inning and went 3-for-4 with three runs and two RBIs. 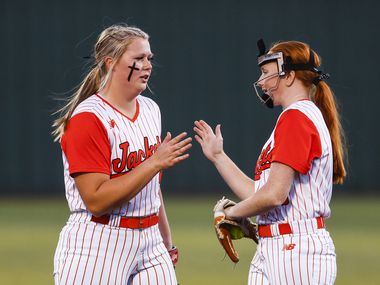 To see subscription options for The News and SportsDay, click here.