The Information Access Right Commission (IRAC) on Tuesday 30and November 2021 launched the Records Management Code of Practice Training Manual in Freetown. The ceremony was held at the conference hall of the Ministry of Finance in collaboration with Ministries, Departments and Agencies, MDAs, Civil Society Organizations, CSOs, Academia and Media.

IRAC President and Information Commissioner (CIC), Dr. Ibrahim Seaga Shaw, said the launch of the Records Management Code of Practice Handbook is the culmination of a series of events that the commission has organized in recent months with the support of UNESCO. This, he said, is intended to promote transparency because there is no accountability without records, and moreover because decisions and policies are informed by the availability of not only records, but also records. credible. The CIC cited Part 4, Section 27(1) of the RAI Act 2013 as justification for these activities, citing that public authorities mostly have audit problems, perhaps not necessarily because they are involved in corrupt practices, but because of their poor record keeping. . He paid tribute to UNESCO, civil society, stakeholders and IRAC staff for supporting the process that led to this outcome.

Dr Shaw prefaced his statement by noting that his Commission has made steady progress in popularizing the RAI Act and in building compliance by public authorities, particularly with the proactive disclosure of information and responding to inquiries. access to information, which he says has helped Sierra Leone jump five places in the MCC scorecard from 85% in 2020 to 90% this year.

“I want to take this opportunity on behalf of the Commission to officially launch the Records Management Code of Practice Training Manual and hope that it will be used to promote compliance with the RAI Act,” concluded Dr Shaw. The manual contains a preamble, functional responsibility, definition of key terms, and implementation tracking among key components.

Giving the context of the event, RAIC Archivist Fanta Morgan described the records as a process that can only be built through effective collaboration and not in isolation. 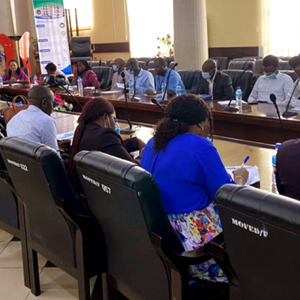 Principal National Archivist Albert Moore described the RAIC’s records management efforts and progress as commendable, noting that the Act emphasizes the importance of records management for accessing information. . A weak registration system leaves room for corruption to flourish and hinders poverty reduction, economic growth and prosperity. “The RAI law only makes sense if records are put in place to complement access,” he added. He ended by asking the RAIC to continue to push for the new archives bill to become law, to work with others in the archives circle to improve the cadre of archives managers and the restructuring of all archives offices in the regions as an unavoidable objective of the Commission.

Participants from different MDAs and CSOs expressed their delight with the progress made by the Commission and urged them to monitor the use of the document by public authorities, as they promised to disseminate the information, including copies of the manual, to their respective institutions.

what does this mean for local government?